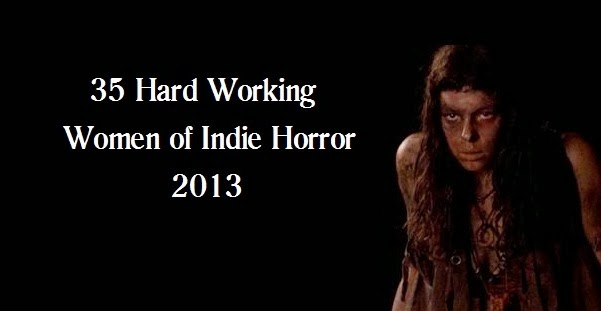 A new year approaches and with it comes challenges for one and all. What about those ladies who are out there scouting for film sites, designing sets, memorizing lines, putting together wardrobe for actors, mixing up batches of blood, making guts, building a monster, writing an amazing script, promoting a novel, or how about directing her first feature film? Phew! That's a lot of hard work and on top of that some women of Indie Horror hold down full-time jobs in addition to their work in horror.


This year, I wanted to do something different and not focus on picking one women who represents the genre. No, you won't find just one, but a whole list of 35 women who are working in their field of horror and inspiring and paving the way for women of tomorrow. To narrow it down to just one was impossible. Each woman is unique in what she does and the time put into marketing and networking in addition to interacting with fans on sites such as Facebook, Instagram, Tumblr, Twitter and yes, even Myspace is truly amazing knowing their schedules are jammed packed with other activities.

I have to cut it off somewhere. These are just some of the amazing women who are very active in Indie Horror whether they are acting, writing, directing or promoting I am blown away with what these ladies of Horror have done in 2013 and looking forward to seeing what they have in store for us in 2014.

Help a lady out go to their IMDb/Facebook pages and give them a like. They do their best to entertain and inform horror fans...give a little love back.

Kristy Jett left a comment on Charred Remains facebook page and I thought it was sweet and wanted to add it to the the list. She said, "Awesome list! Great additions would be Jessica Dwyer of Horrorhound Magazine, April Snellings, Liisa Ladoucer, and Monica Kuebler from Rue Morgue, Rebekah McKendry from Fangoria, Christine Hadden from Fascination with Fear, Andre Dumas from The Horror Digest, Heather Seebach from Viewer Discretion Advised just to name a few. They are absolutely some of the hardest working women in our community!"